Beloit townsite was homesteaded by Aaron A. Bell who came from Williamson County, Illinois by an ox-drawn covered wagon, arriving in April 1866. His was the first home put up on the townsite, a log cabin which stood about a half block south of the new municipal light and water plant. It was 1868 before the settlement was named. It was called Willow Springs after the fresh water springs surrounded by willows on the north bank of the Solomon River just west of the old light and water plant. The springs served those located here, as well as hunters, emigrants and freighters passing through, until the mid 1870's.

Another post office, established in 1885 in Douglas County, was known as Willow Springs, and it is possibly because of this that the name of the settlement here was changed.

It was in 1870 that Timothy Hersey took the initiative to rename the town Beloit after this home town in Wisconsin. Bell was appointed the first postmaster in 1870. He was succeeded in April, 1871, by Henry H. Lyon. The first post office stood on the north side of Front (now South) street, about 150 feet west of Hersey Avenue. This also was the depot for the stage coach line from Solomon, which carried the mail.

In 1869, Hersey purchased part of Bell's land. Bell retained the plot west of a north-south draw which probably closely paralleled Bell Street and Hersey took the land east of the draw. Hersey started getting out timber to dam the river and build a mill in 1869. Despite the heavy floods, he put his sawmill in operation in September, 1870 and his grist mill the following season.

A sketch of Hersey in the Dickinson County Historical Society reports, "it has been said at one time he was the very life of the Solomon Valley. He gave the first child born in Beloit the deed of a fine lot, gave lumber liberally to the first church built in town, also to the first school house and printing office here." In 1857 he went to what is now Abilene, Kansas. His wife and two small children followed him the next year. Hersey had laid out a town and his wife received the honor of naming it, calling it Abilene. Hersey was the second settler in Dickinson County, and their daughter, Sylvia, was the first child born in Abilene.

His family followed Hersey to Beloit in 1872 and they lived here a number of years before he moved to the West Coast. Hersey died May 5, 1905 at the home of his eldest daughter in Castle Rock, Washington. 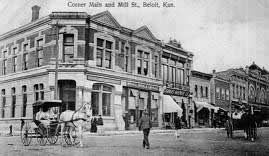 L.D. Williams, who had served during the Civil War in Company F, 37th Illinois infantry, arrived in Beloit in the fall of 1870 and built the City's first business structure, a two-story native limestone edifice still standing on the northeast corner of the Mill-South Street intersection. He opened a merchandise business in partnership with James Finnegan.

The first congregation organized in Beloit was by the Baptists in the summer of 1871, with the Reverend George Balcom as minister. Helping organize the group was Reverend O.N. Fletcher of Asherville. History records that on one occasion Reverend Balcom strode into one of the saloons dotting Mill Street, took the violin from the hands of the establishment's musician, walked behind the bar and held the audience's attention of an hour by singing, playing and preaching. The Methodist congregation was the first to erect a church building here in 1874.

A cottonwood store building located just south of the structure on the southwest corner of Mill and Court was the first used to hold classes here in 1871, the year it was put up with Hersey's help. Reverend Fletcher was secured as a teacher that year, his salary being raised by subscription. Beloit's first regularly appointed teacher was W.A. Reeder, later a congressman, who taught in the fall and winter of 1872-3. The city's first school district, the second one organized in the county, voted $5,000 in bonds in 1872 for a building. Work started on schedule and the first story was completed in 1873.

Beloit was surveyed by Alver Cooper and the plat filed with the Register of Deeds on March 26, 1872 for T.F. Hersey, A.A. Bell, George Campbell, Alexander Campbell, Charles H. Morrill, Edward Valentine, William C. Ingram and Daniel Keplar. Possibly upon the petition of Campbell, Valentine and "57 other electors", Beloit was organized as a city of the third class in August, 1872, by an order of the Honorable Andrew S. Wilson, Judge of the 12th Judicial District. It was proclaimed a city of the second class March 10, 1879, by Governor John P. St. John.

Tim Hersey was chosen Beloit's first Mayor at the initial election and served from August, 1872 to May, 1873. At the first Council Meeting on August 21, 1872, Lew J. Best was appointed City Clerk by Hersey and the duly-elected Councilmen were qualified for office. Beloit's first Councilmen were W.C. Ingram, M.R. Mudge, H.H. Lyon, Joseph Baughman and Joseph R. Vaughn.

The first railroads, from Atchison and Solomon, reached Beloit in 1878 to 1879. The city's first water "system", consisted of a windmill and a storage tank, was installed in 1881 at a cost of $136. Bonds totaling $26,000 were issued in 1886 to pay for a steam-driven electric power generating plant and a stone water tower for a municipal light and water system.

The first steps toward providing Beloit with a city building were taken at the June 15, 1897 meeting of the Mayor and Council. A committee on the city hall was appointed on July 6, 1897. A one-story structure 50 by 86 feet was decided on though dimensions later were changed to 50 by 40. The building erected was a two-story native limestone affair and cost about $3,000. It was completed in 1898. No records could be found of the city allocating funds for the project. It is believed excessive fines, assessed frequently, against the city's many saloons, raised the needed money and records of the police court bear out this belief